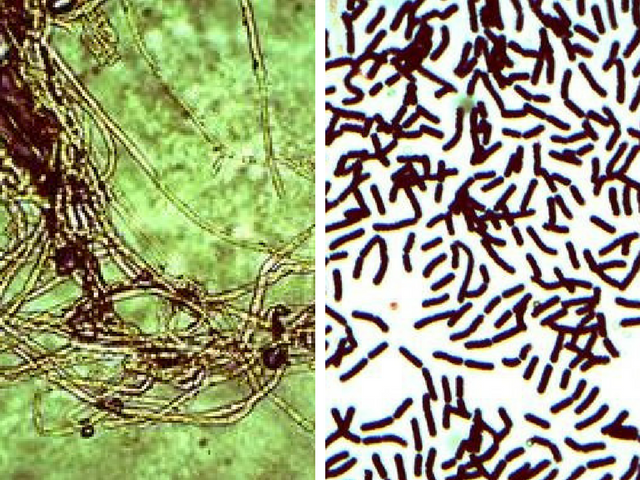 (Part I) Microbiology 101 for the Farmer: Microbes on the Farm

Trichoderma, Rhizobia, Bradyrhizobia, Bacillus, Pseudomonas, Mycorrhiza, Clonostachys, the list of organisms and terminology can go on and on and on…

Imagine this… a seed treatment salesman comes running up to a potential customer spouting off a bunch of information you can’t understand – crazy Latin names talking about “CFU this!” and “root nodule that!” It’s likely that customer has a blank look on their face, and thinking one of two things:

At ABM, we understand that learning about microbes, inoculants and the like can be overwhelming and confusing – especially to first-time users. This information I am sharing today in this article will hopefully shed some light on the difference between some of the most common organisms, as well as some of the terminology you may hear in the Ag Inoculant industry.

So, what exactly is the difference between bacterial and fungal cells? My kids would tell you they are just germs and… “gross!” However, these organisms are significantly different from each other. Both bacteria and fungi are very diverse in how they look and function even within their own cell types.

What does this tell us? Humans are more closely related to fungi than bacteria since humans also have eukaryotic cells.

Eukaryotic/fungal organisms can be either single cell or multicellular. The multicellular nature of fungi allows them to create filaments, or a series of “branches.” That is why the “green stuff” growing on your cheese looks fuzzy.

Examples of Single and Multicellular Fungi

Have a question regarding a product? Send us an email using our online form to get answers from an expert Agrauxine Sales Representative.
PRODUCT INQUIRY